our story…the history of the Pounce Pad 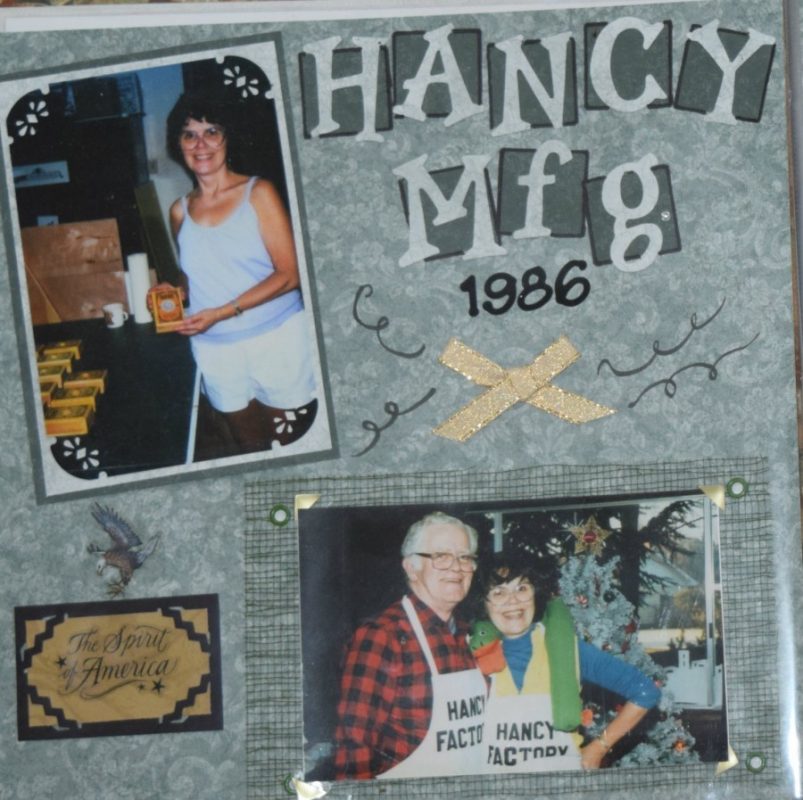 These are a couple pictures from our family scrapbook! My dad was a true entrepreneur. He had three of his ideas patented and succeeded in doing what he always wanted to do – leave a mark on this world. If my parents could see where the business that they started in their garage is today they would be so shocked!! In the picture of my parents together in front of the Christmas tree my mom has what looks like a green snake around her neck. That was a draft stopper she made for my brother’s room that year,  they lie at the bottom of the door to close up the crack. She was always sewing and I owe my early exposure to the art of sewing to her and her generosity of sharing with me one of her most prized possessions, her Elna sewing machine.

Hancy Creations, Inc. was originally Hancy Manufacturing Company and began in 1985 by Raymond E. Hancy. He was the inventor of the Pounce Pad. Originally the Pounce Pads were made for the Sign Painting and Graphic Arts Industry. (That’s why they’re called Pounce Pads – Sign painters used a charcoal powder called pounce in them). The time that he started Hancy Mfg. was right when computers were taking over those industries so the customer base for the Pounce Pads was shrinking. Before that decline things were good and Ray who was semi-retired was beginning to wonder what he had gotten into. It seemed he was working more than before he retired. Of course the Pounce Pads were made out of wood and had about 19 steps not including the step a & b’s and sometimes c’s of each of the 19 steps before being complete. He decided to sell after a few years.

This is what the Pounce Pad replaced. Sign painters called it “the nasty bag”. It’s a rag with charcoal pounce powder inside, wadded up and tied. Michelangelo used a similar bag when he was working on the Sistine Chapel! Yes, he used a pattern to mark it first!

This is one of the earlier wood Pounce Pads.

The new owners were myself – Marilyn (Hancy) Deas and my husband, Mike Deas. We bought the company in  1987 when we were at a crossroads in our jobs and decided to risk all to follow the dream of being self employed. For years we held to that dream only to realize that running your own business is not that great financially, but the perks are awesome.

In the early 1990’s things started to change a little. We discovered the quilt world and over the next 10 years we slowly grew. Being a sewer all my life it was a very natural fit. I was thrilled to be a part of the quilt world.  Some of you are very familiar with our early customers who encouraged us and helped spread the word of our easy  quilt marking tools, Pat Yamin from Come Quilt With Me, Inc. and  teacher and author, Pam Clarke, were both very instrumental. They gave us hope that we were on the right road almost 30 years ago.

When we started out we didn’t have the Full Line Stencils, we were selling our Pounce Pads to be used with traditional stencils. The Full Line Stencils have only been around the last 10 years or so. We had the idea for years before pursuing it though. I finally got up the courage to go to the Innovations Show in Tacoma WA in 2004 and I showed my prototype stencil to Laurel Barrus, the founder of Handi Quilter. (She was another early customer with lots of great advice and encouragement.) At that show I transferred my very first prototype stencil on to the quilt loaded on the Handi Quilter long arm machine they had set up in their booth and one of the ladies beautifully stitched out the feather heart design in about 30 seconds.  I was pretty sure after that, it was worth pursuing.  Looks like I was right, the Full Line Stencils were a hit – even at my first show when I only had about 18 different designs to choose from!

It’s been a fun and exciting journey and it continues on now with almost 500 designs to pick from and so many people who love our products and have supported us and continue to support us. I can think of no other thing that I would want to call “my life’s work”.